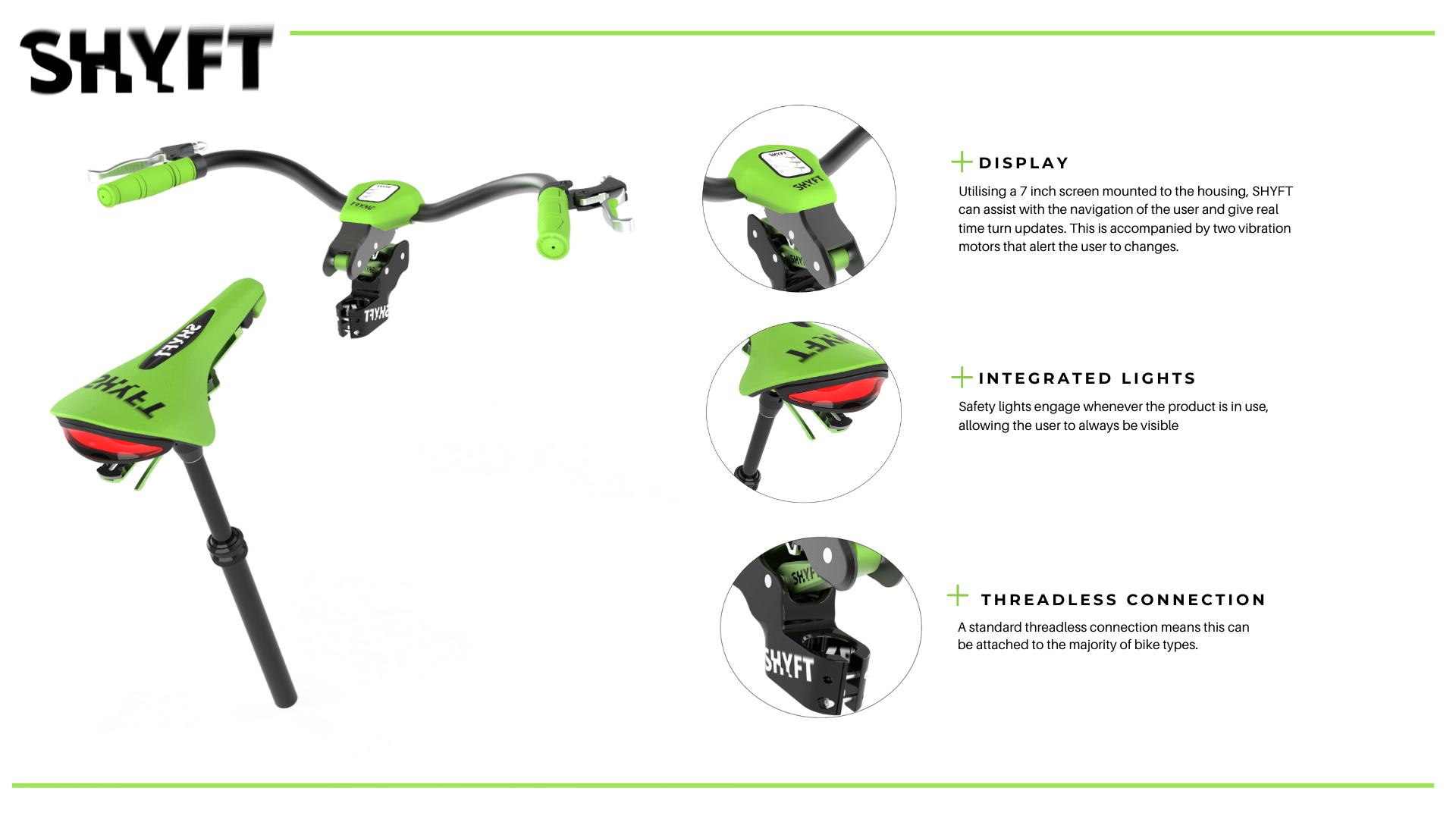 SHYFT - A multi component solution for the customisation of shareable bikes

SHYFT is a multi-component system, that allows users to simply and securely adjust key safety and comfort characteristics, allowing for a more personalised experience on shared bikes. Boasting both standardised connection attachments and an interactive display, SHYFT can be adapted to the majority of current bike layouts within any city around the world. Shyft also comes with navigation, which allows the user to connect to the bike via a secure phone connection. This can not only deliver key safety instructions and information but also allows for an app integrated navigation systems to aid the user with directions throughout their environment.

The bright colours and integrated safety lights ensure the user is always visible on the roads whilst simultaneously alerting potential customers to the presence of the bike within the city. 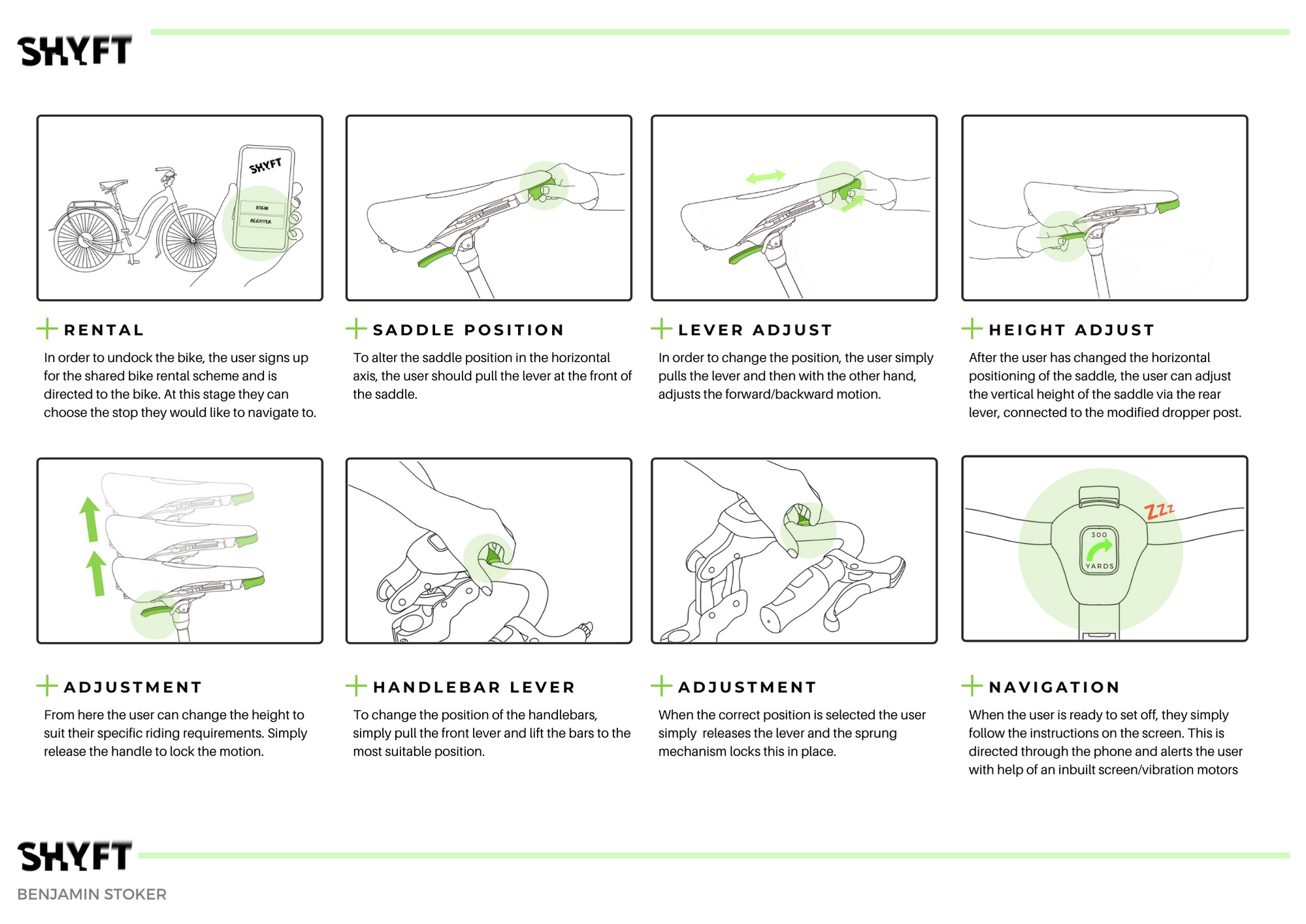 The adjustment of the two mechanisms relies solely on the user engaging with conveniently placed handles, that allow and in turn restrict the movement of the three different mechanisms.

Once the bike has been rented, the user can also set navigation settings, which will alert them to turns and navigational directions through the use of vibration motors and an integrated screen. The mechanisms themselves consist of forward and backward horizontal movement (for the sale), a separate height adjust (for the saddle) and horizontal and vertical diagonal movement in the case of the handlebars. 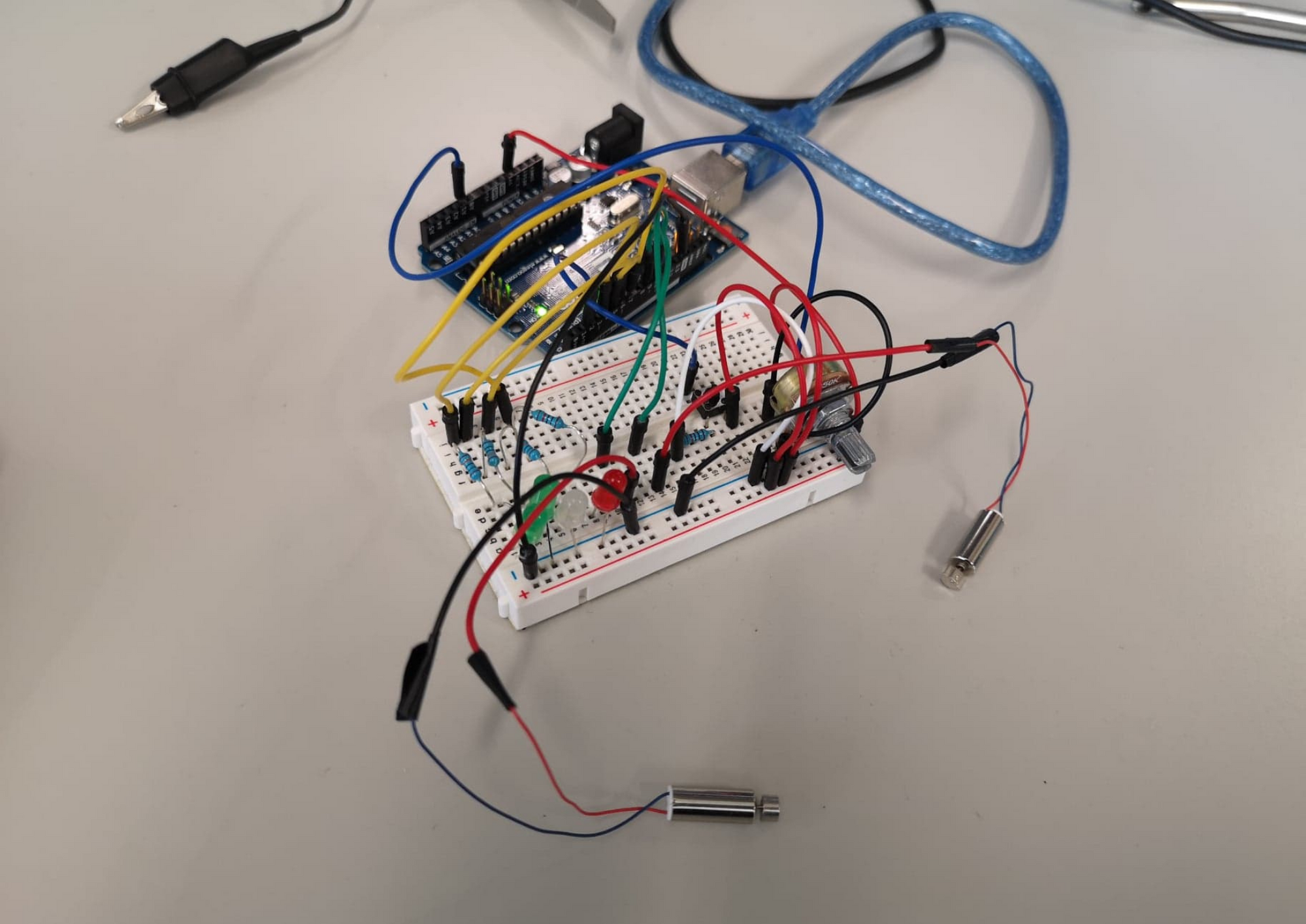 The first plan was based on the ideal navigation electronics. These would be those that would exist in the finished product. Something that would connect from the mobile phone via Bluetooth to the bike and give real-time updates on navigation from google maps. This was later changed to a demonstrative approach should be taken to provide a prototype which could test the theory with users.

This plan was developed as a more realistic approach for electronics development and meant that the theory could be tested alongside the physical prototypes. This was used to allow the user to make comments on how they interacted with the navigation notification elements. These included the LED's and vibration motors, This also allowed them to be visible by allocating pins to white and red lights for visibility. 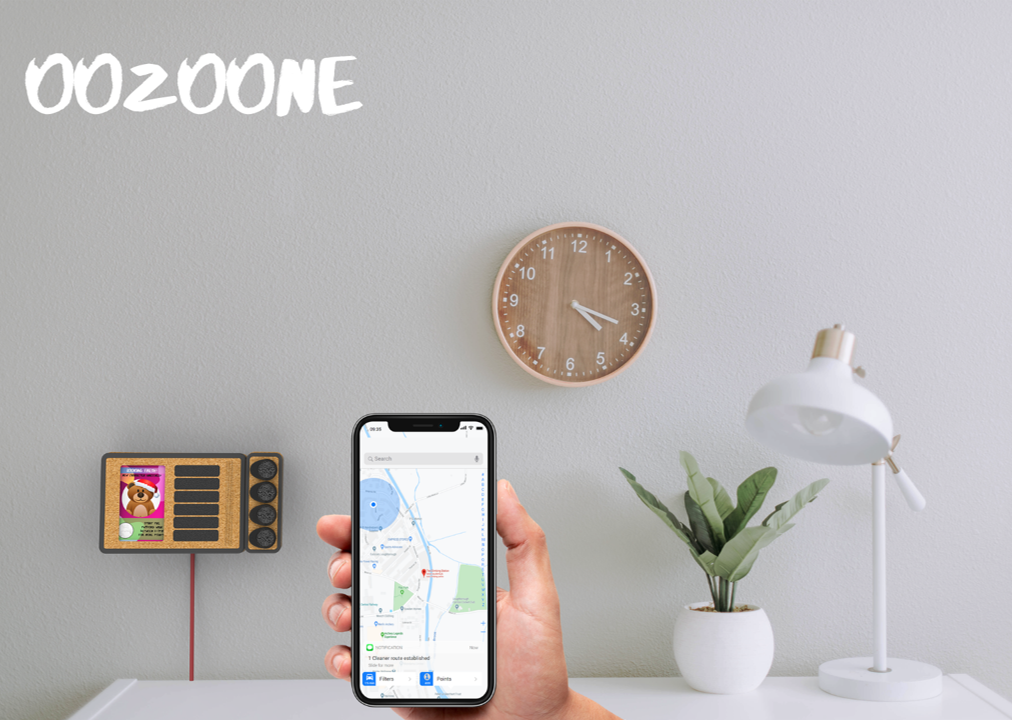 Oozoone - A product to plan effective and conscious routes based off the quality of air around the users environment.

Oozoone works alongside an application and connects as part of a wider system. The premise behind this device is that by interacting with other’s applications (teachers and walking bus leaders) throughout the day the small tabs would track children’s movements across an application and cross-reference this with air-pollution statistics. Parents would access/share this information with their child later, giving them an opportunity to unpack why the quality of the air people breathe is important. Similarly, the adult would embark on similar processes, however, instead of tabs, interact directly with the application. Both characters and rewards can be earned through varying levels of the tab/app interaction and users are encouraged to not only take better routes throughout their commute but experience untouched natural environments (where air quality is more favourable) outside of commuting hours. This would be communicated through a point-based system/leaderboard which gives participants the opportunity to compete against peers (whether that be school friends or colleagues) and collect rewards if/when they complete challenges. 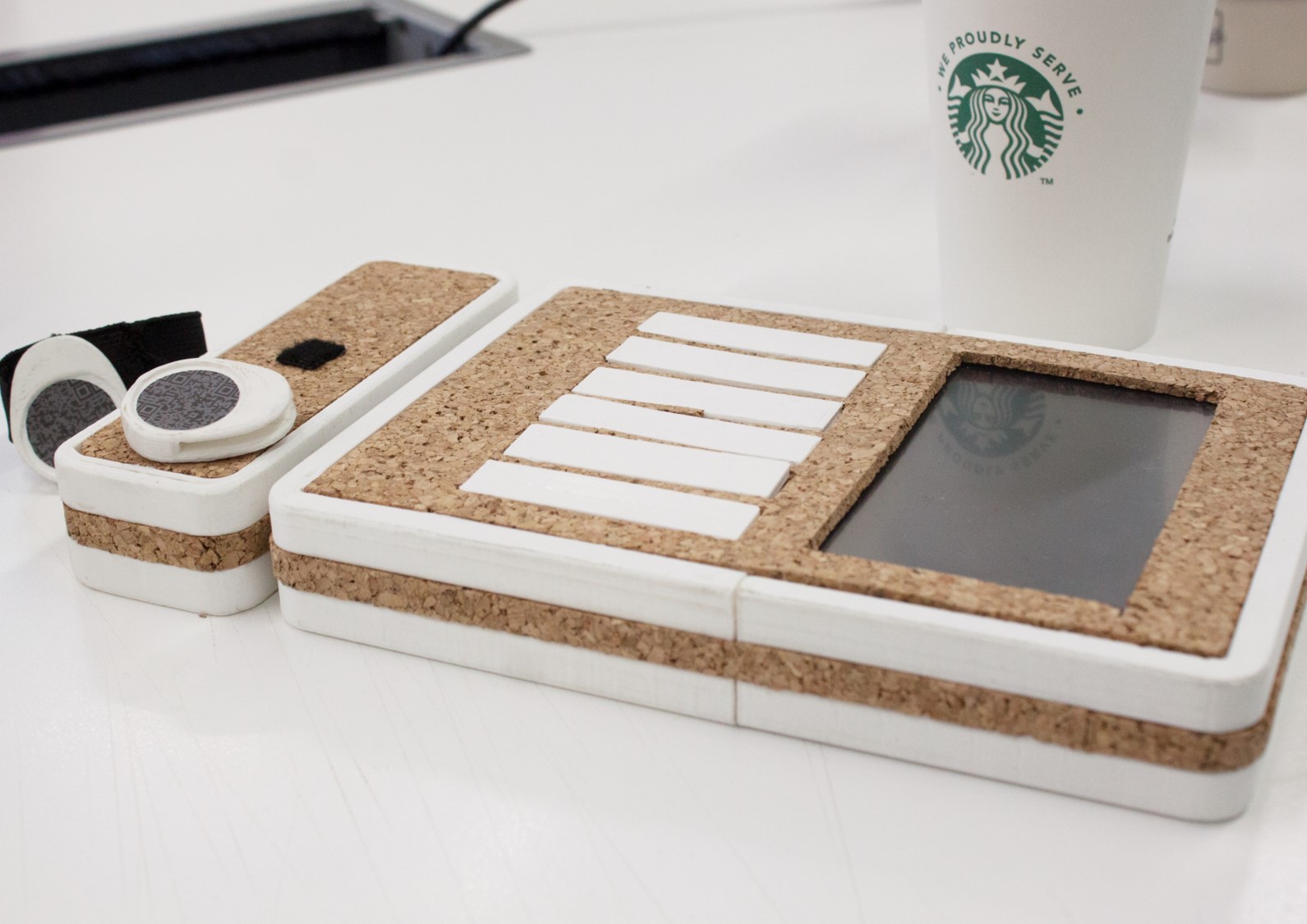 Prototyping was a huge part of the work produced for the Oozoone project, allowing to accurately monitor whether or not the behaviour of a user was influenced by the behaviour change design strategy. To accurately measure this, a Wizard of Oz approach was taken, with the researcher (or the user in this scenario) controlling certain aspects that would normally be automatic (with the integration of a PCB and programming). 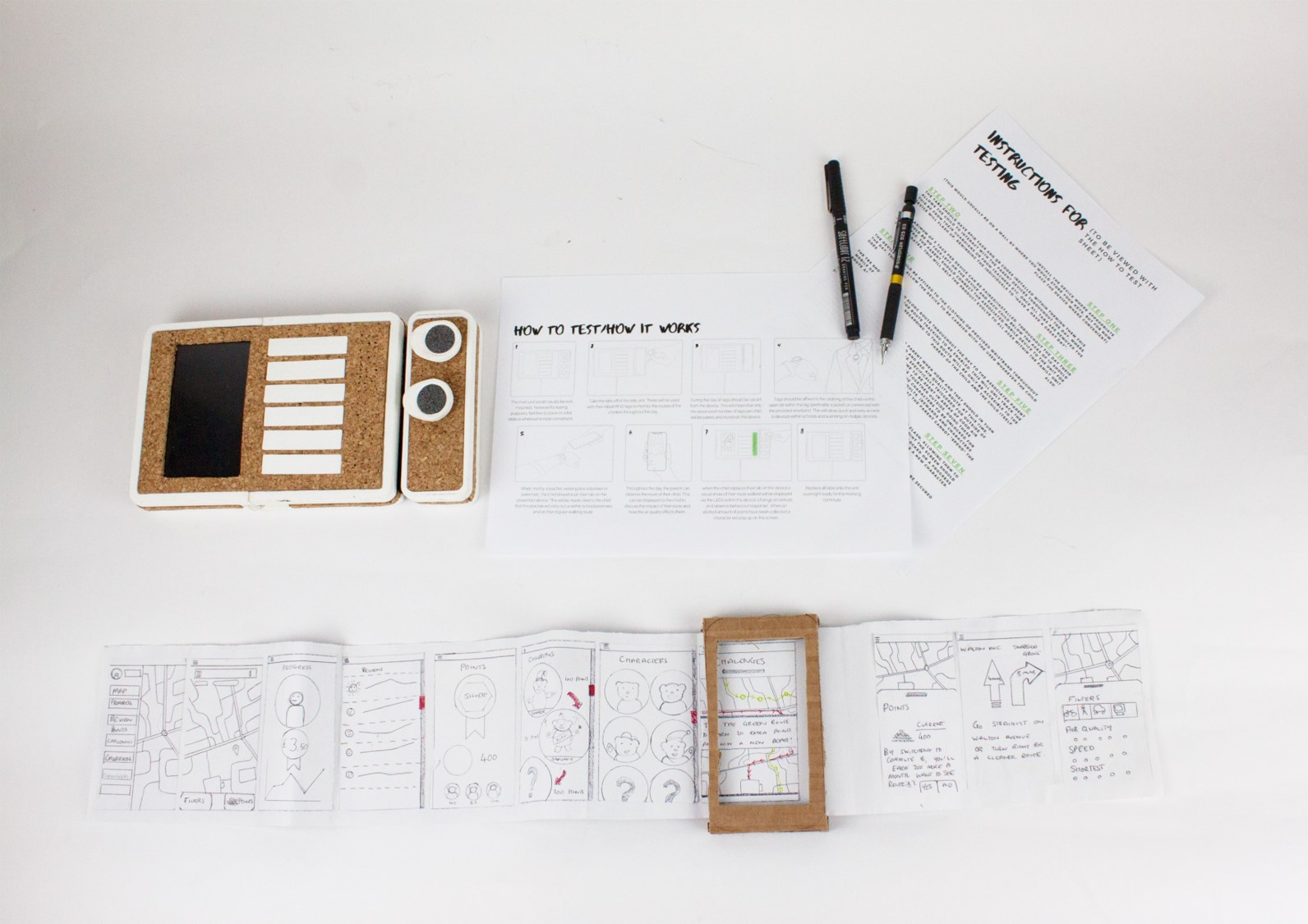 Due to the ethical concerns behind testing, it was appropriate for this project to give a secondary user a pack by which they could test and feedback on. In this instance, the user was required to run through the activity with their family. To arrange this, detailed step by step testing documents, along with the necessary storyboards and prototypes were given and a post-testing interview conducted. 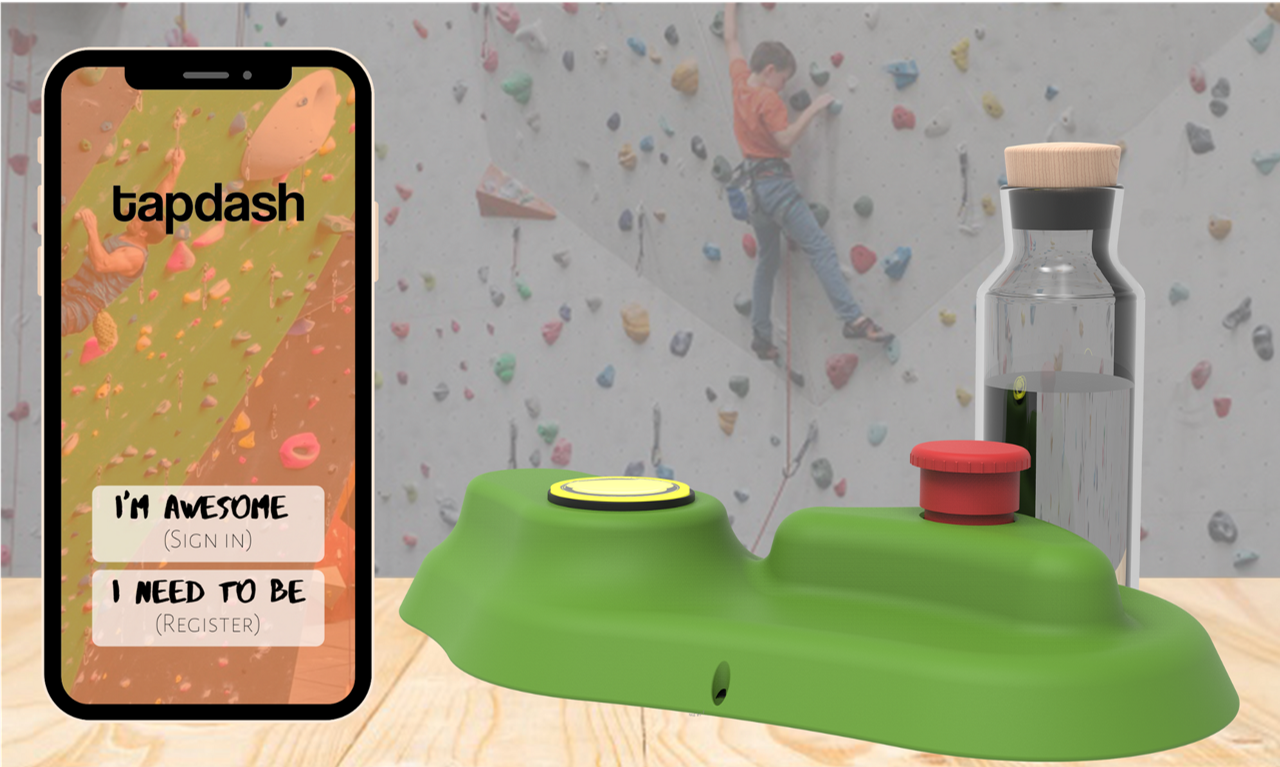 Tapdash mark II was developed as a potential new take on a product given to us by the lecturing staff. This saw us incorporate the current products basic functionality and apply this to a differing market.

In my case, the choice of marketing the product to climbing centres, seeking to encourage competitive use within their centres. This worked by allowing users to time and save their times and in so doing complete with friends. This came with an associated application and would be mounted to the current climbing courses. 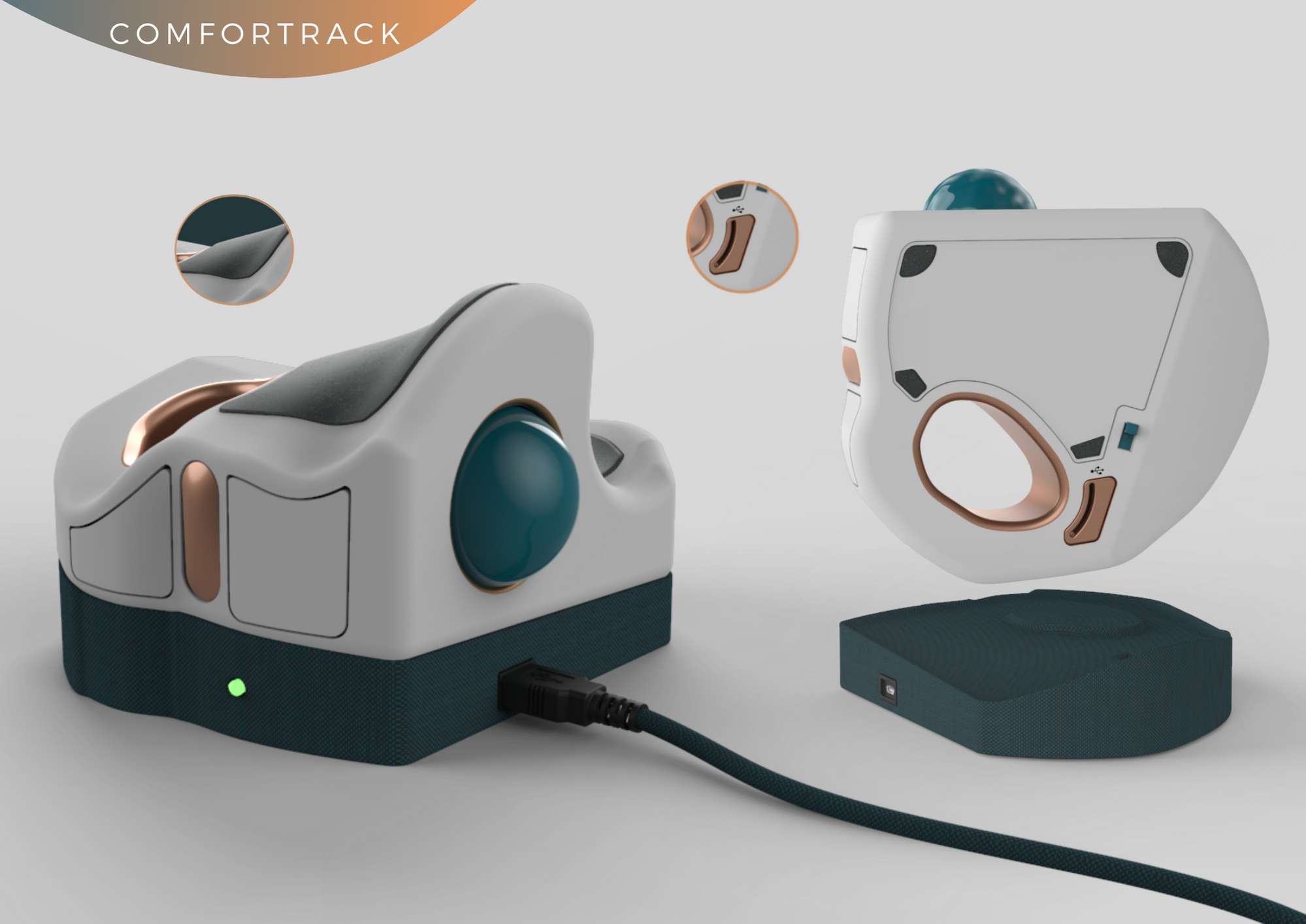 The brief of "To design and model a personalised mouse using scan data, print a working prototype and produce realistic renderings", gave the flexibility to create a truly unique handheld device that would be custom to the user's hand. This initially proved a challenge as scan data was not something at the time I was familiar to using. Once imported, however, the learning curve to a new CAD software was undertaken, allowing me to closely reference the scan data whilst removing imperfections from the plasticine model.

Comfortrack enables every member of the family to actively control their devices. Built-in TPU grips have been utilised to ensure the mouse is gentle on the hand, with a hole for fingers to slide through as extra security from drops. The product pairs through a universal receiver which can be plugged into any computer. With more and more personal computers becoming home media devices, Comfortrack bridges the divide between the tech-savvy and those who just want to watch their content.

Hi, i'm Ben Stoker, a designer that takes a focus on the user centred approach of industrial design with the hopes of creating meaningful solutions to everyday issues faced by a wide variety of users. Inspired by the philosophy of designers such as Dieter Rams and Naoto Fukasawa, I believe that the key to creating viable and robust designs lie in the symplicity of both form and user interaction, designing only what is needed for use.

My work throughout my time at Loughborough has always focused on the user-centred design approach. This has led to several meaningful and inspired products throughout the course duration. These include SHYFT (an accessory that allows users to alter and safely customise shared bikes), Oozoone (a device that allows for the effective tracking of air quality specific to a user with the result of gradually incentivising more favourable routes) and the second iteration of a pre-existing product (Tapdash), that allows for fun and connected competition between speed climbers within climbing centres.

Post university, I hope to become an industrial designer within a consultancy, allowing for a rapidly changing work pace, that both challenges and forever builds upon the design skills acquired from both my BSc and MSc.

SHYFT - A multi component solution for the customisation of shareable bikes