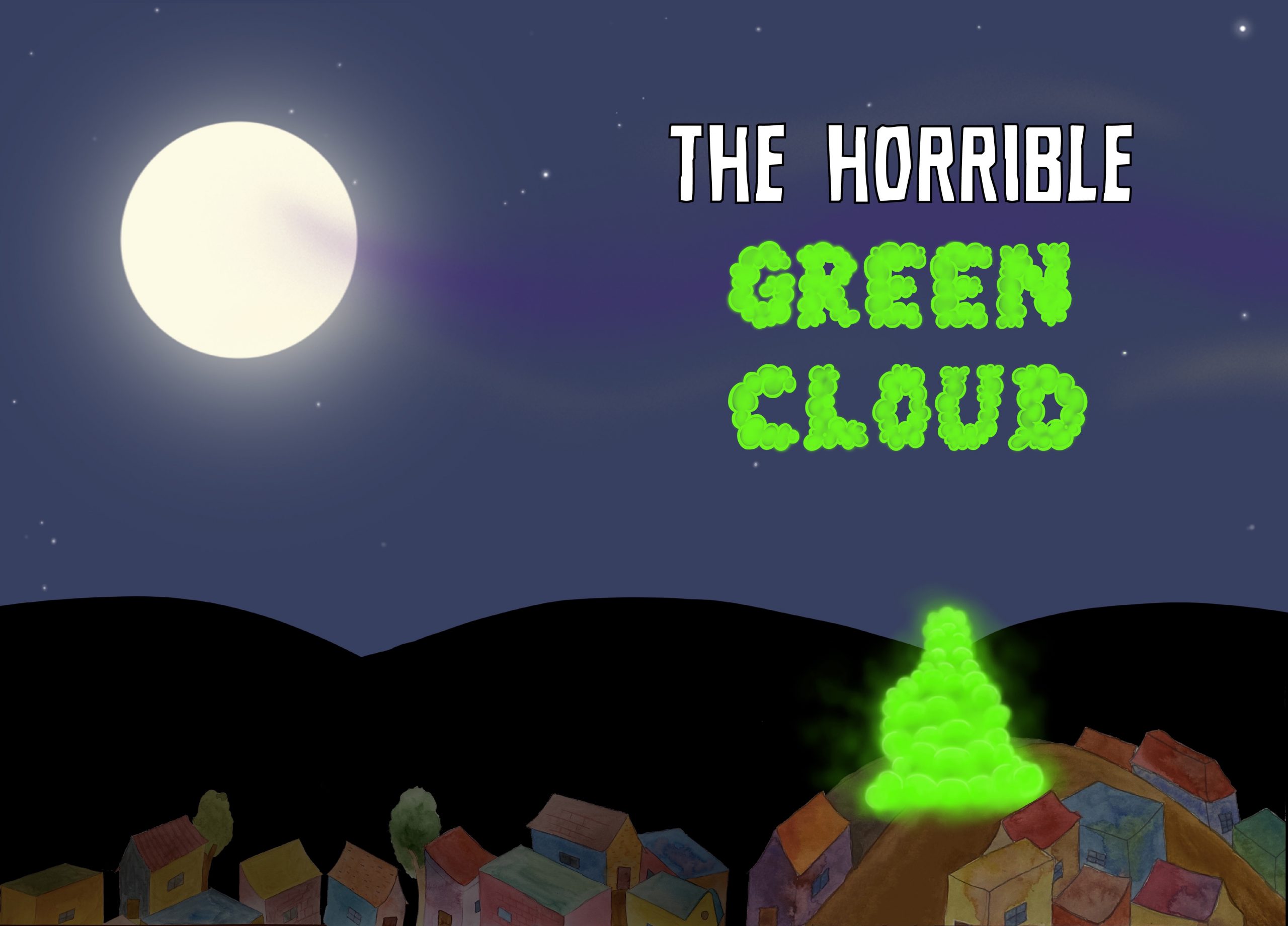 The Horrible Green Cloud - A Pop-Up Book for Children (Cover)

This book is about a gaseous green cloud that escapes a factory and starts haunting a town called Pixelia. This book aims to educate young children about the effects of our actions on the environment and what can be done to prevent the damage being done. In its whimsical, spooky, interactive and enthralling manner, this book has the potential to become one of the children's favourite. With a different pop-up mechanism used on each page, the user is engaged and captivated in the book, thus grasping knowledge effectively. Kindly first refer to the youtube URL given at the end to understand the story better and see the pop-ups in action. 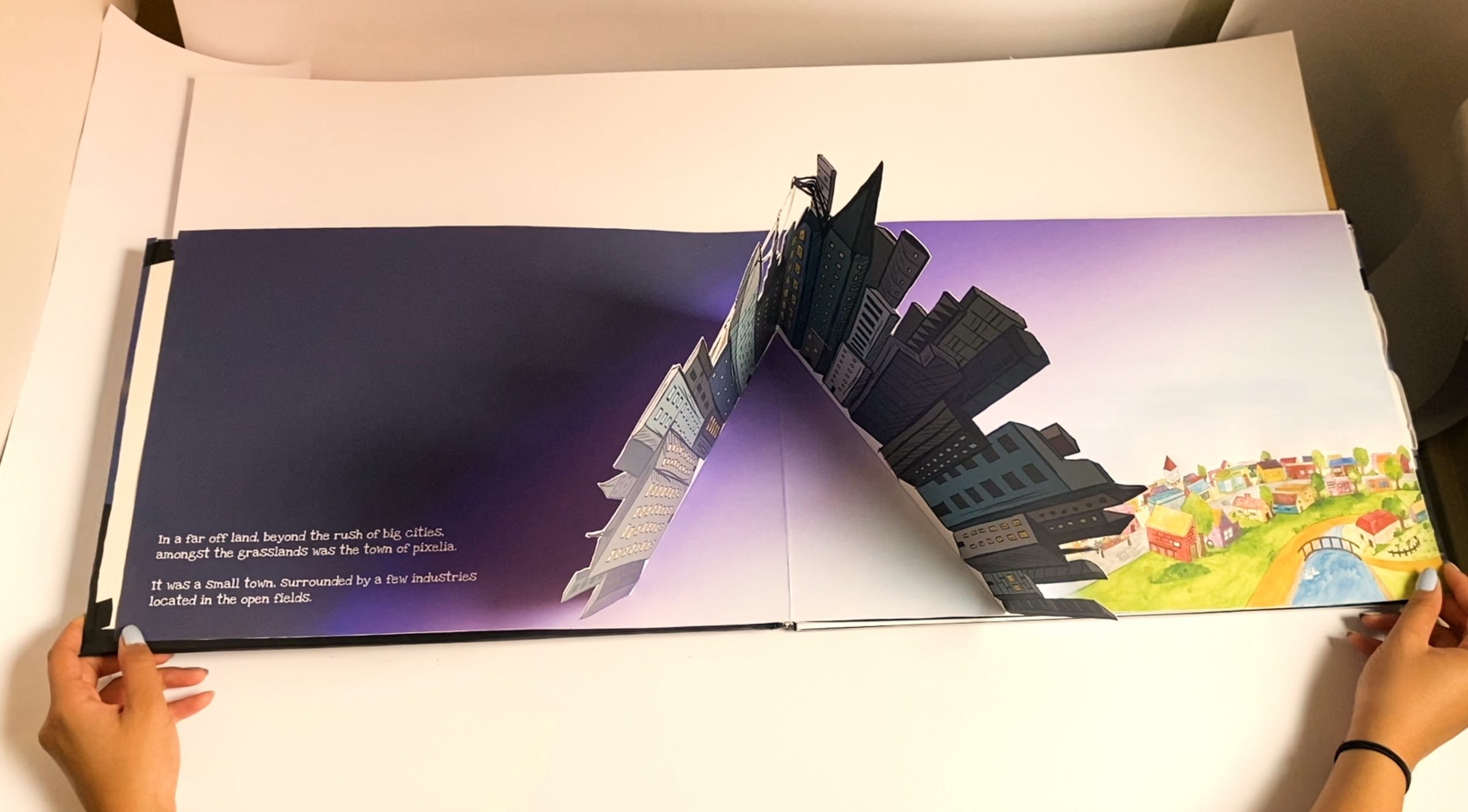 Showcasing a V-fold mechanism are the city buildings made in forced perspective to showcase its sinister and impactful influence on the village. The entire book has a set theme of a combination of hand-painted illustrations with digital illustrations. These two styles are combined and blended in a way that goes well with the pop-up mechanisms and the story presented. 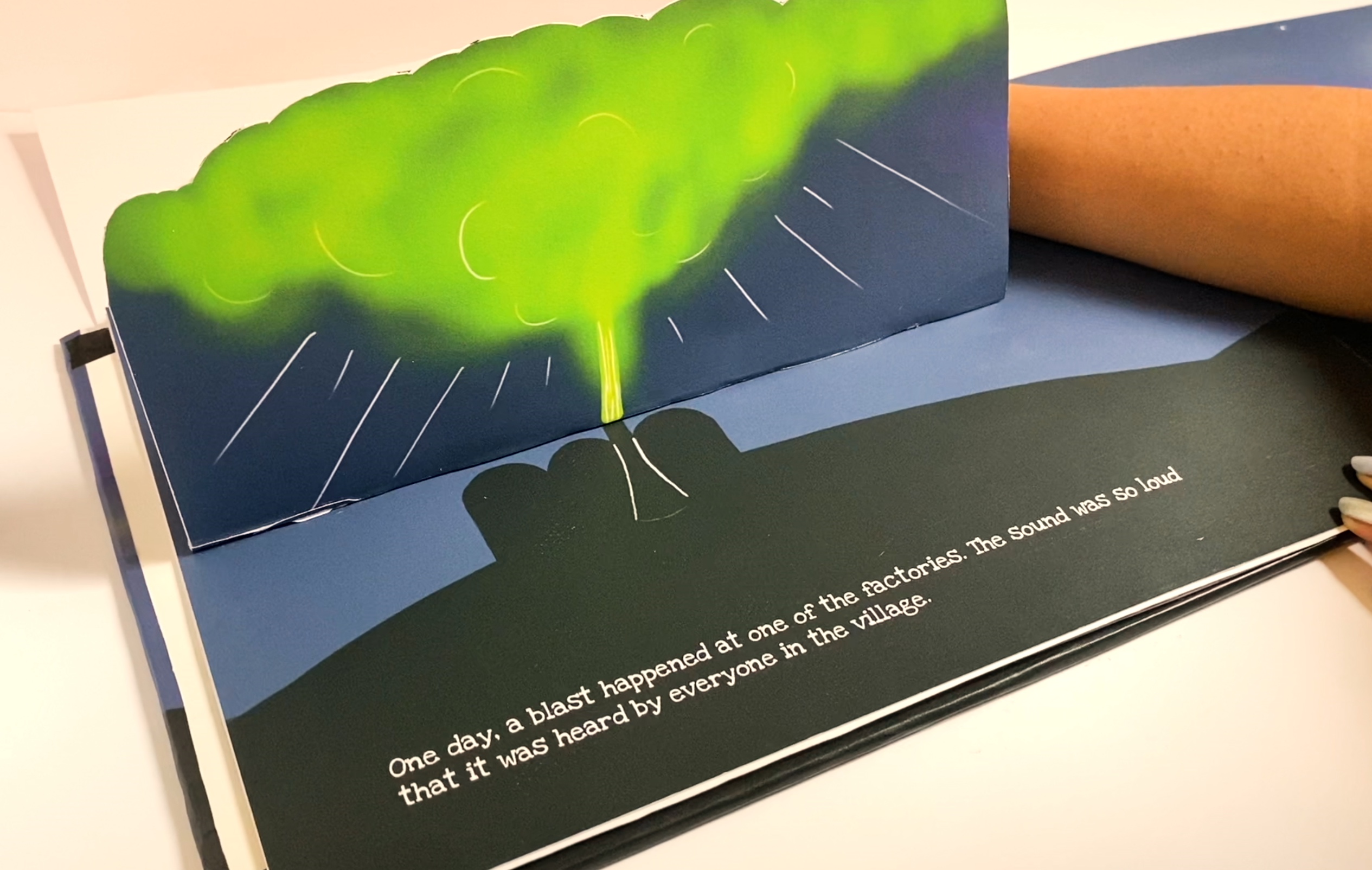 A pull-tab mechanism was used here. The spread shows a normal chimney at first. On pulling the tab it then reveals the blast that happened at the chimney. This mechanism fits well to add a surprise element of the blast. The revelation of the blast through the pull-tab surprises the user about the ghastly nature of the blast. 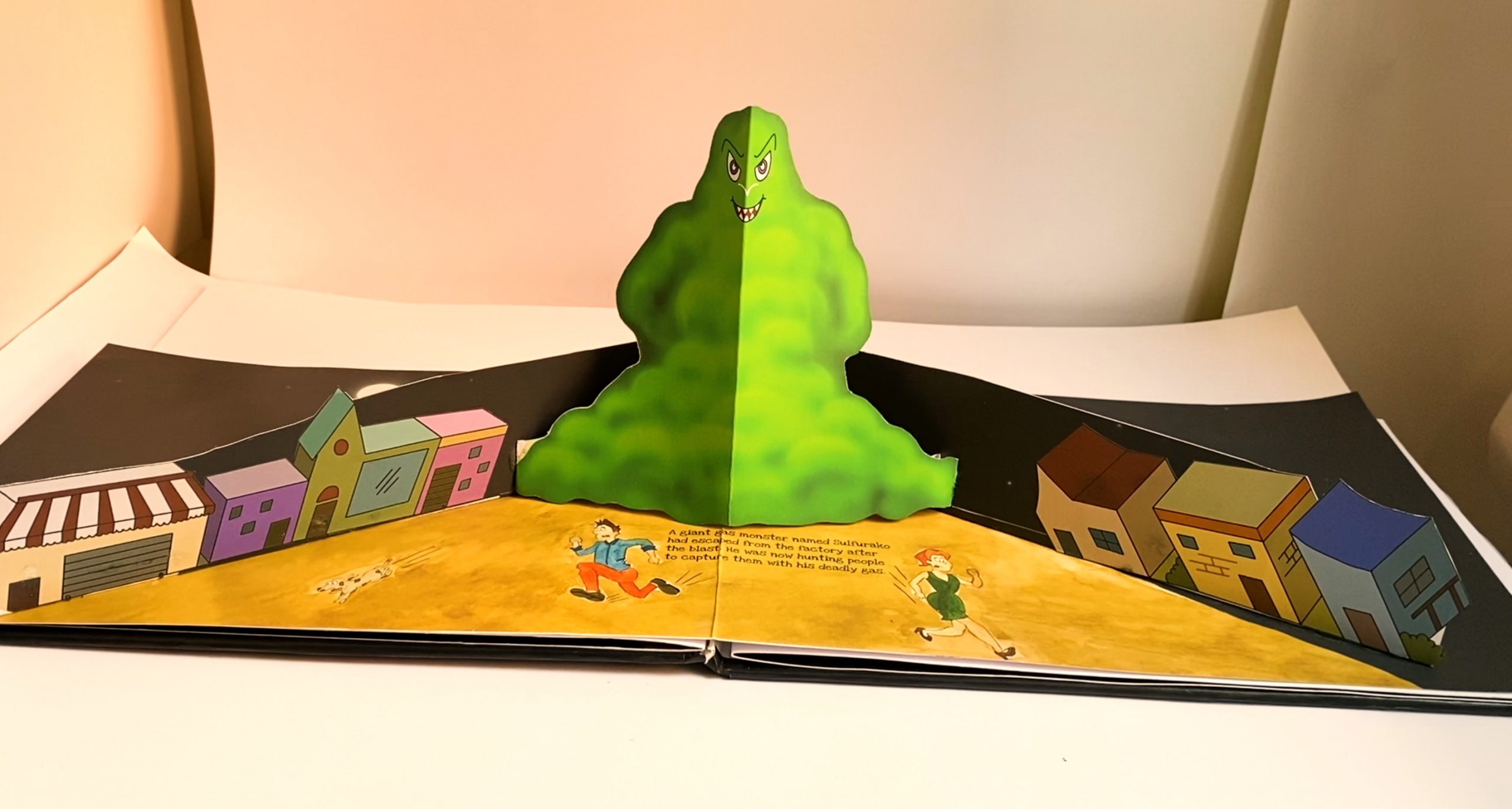 In this spread, the monster outside the window is revealed after the curtain is pulled using a pull-tab mechanism. The action of drawing the curtain is correlated with the action of pulling the tab, hence giving a sense of manipulating a miniature curtain. 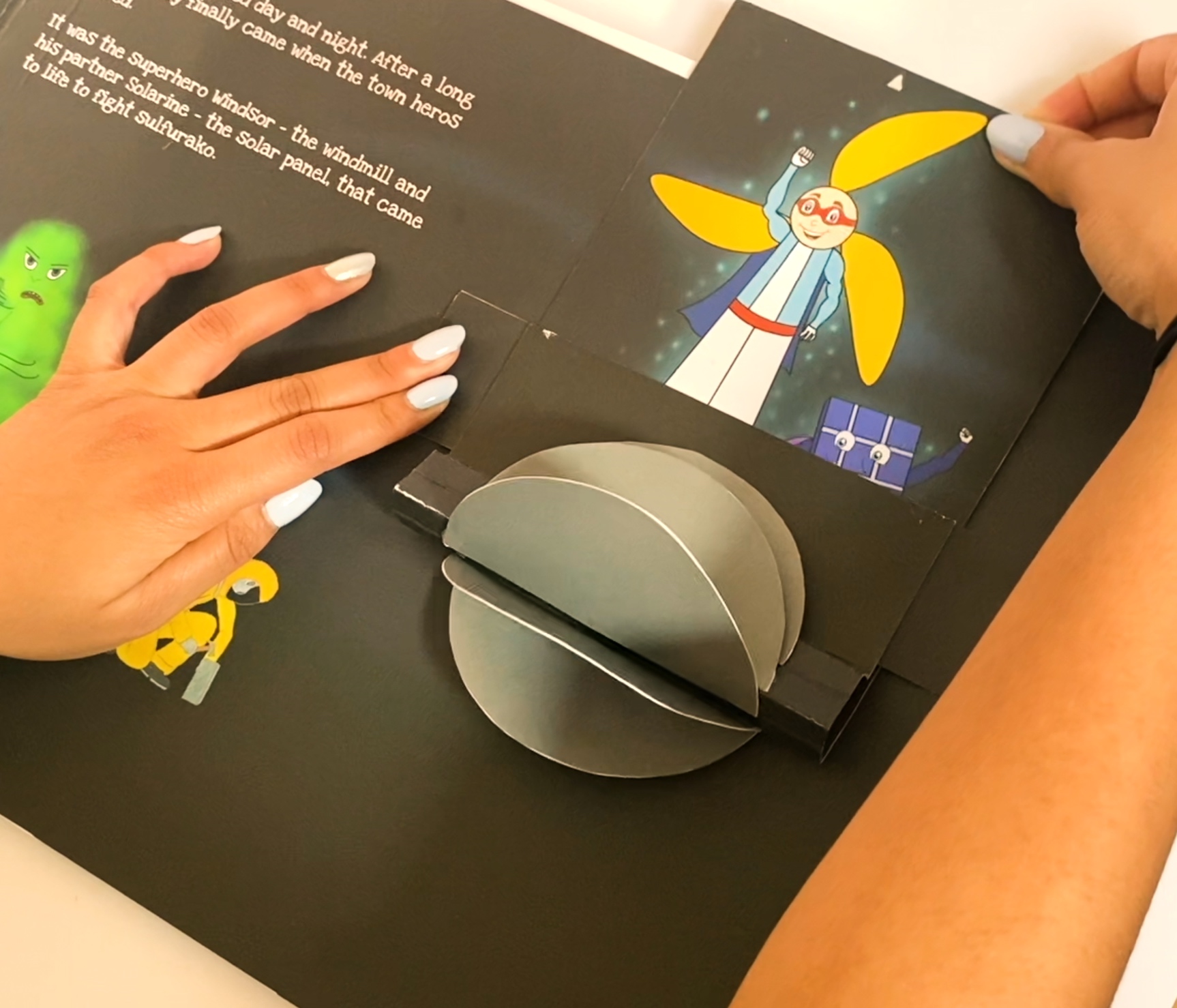 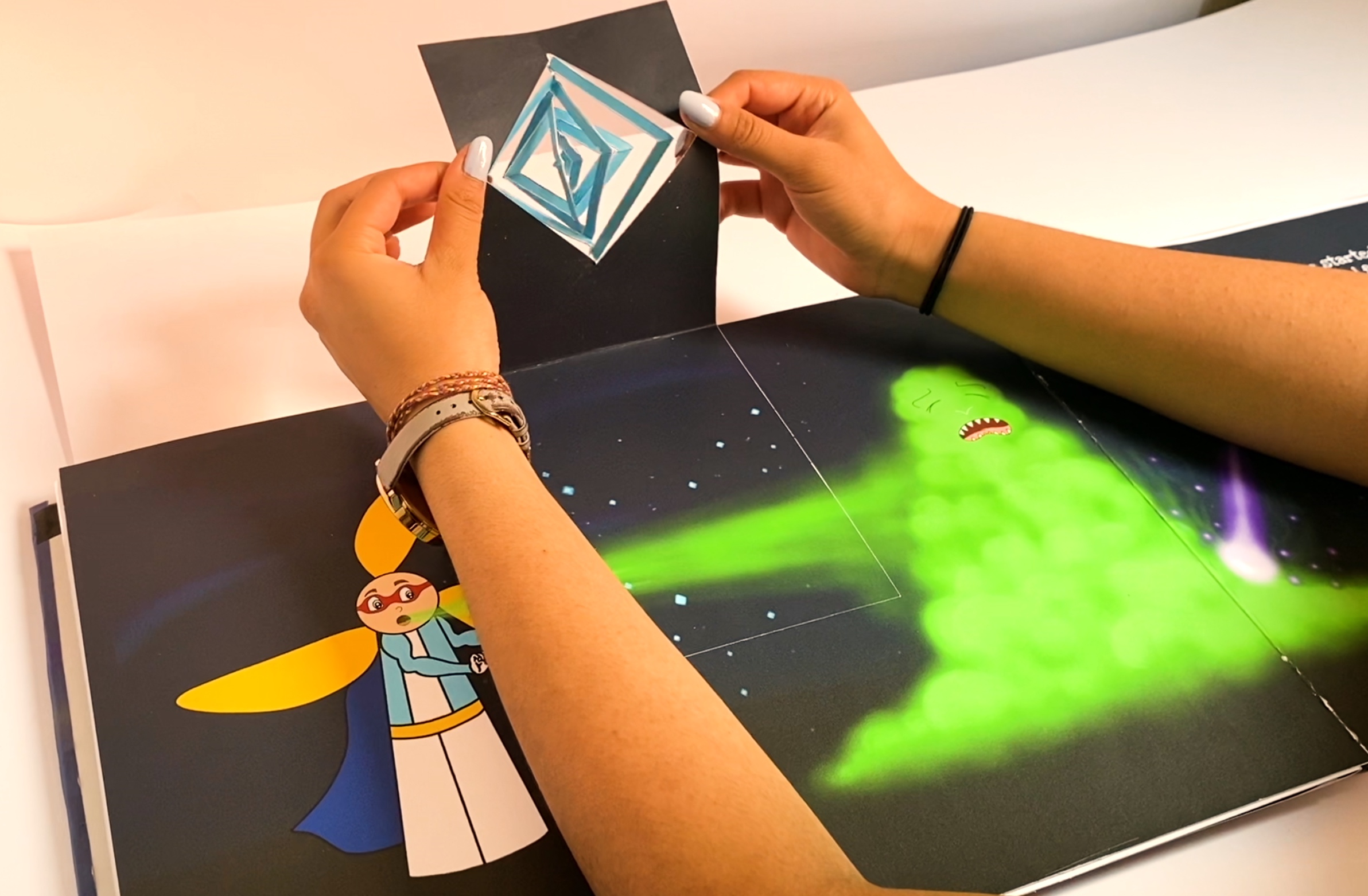 In this spread, a mountain fold mechanism is used to showcase the magical nature of the sparkles flying. The rotating mountain fold gives a unique magical appeal to the sparkling light crystals produced by the solar panel to defeat the monster. 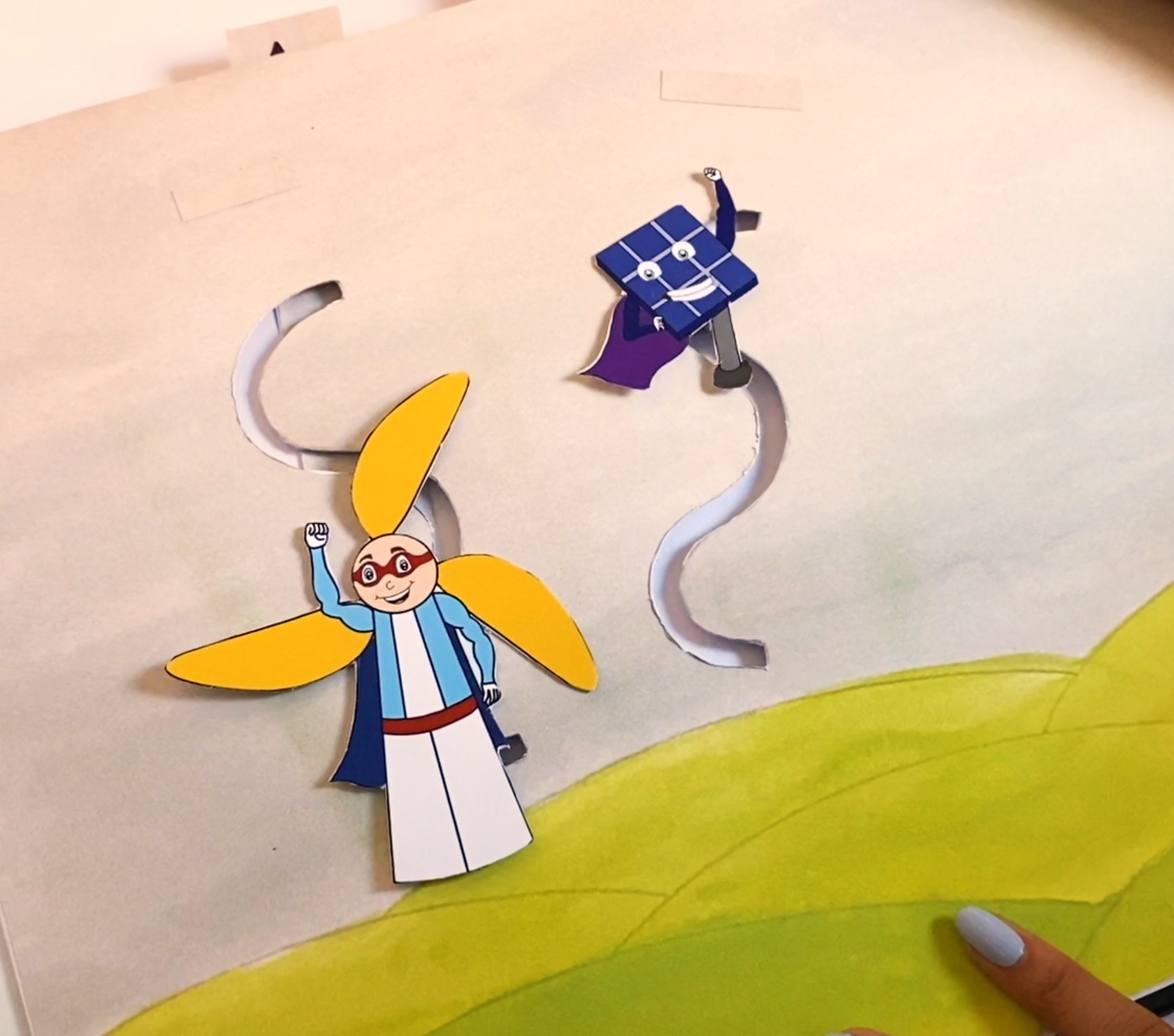 In the final spread, the solar panel and the windmill can be seen flying up in the air with the help of a zigzag pull tab.
Each pop-up mechanism used in this book is different from another, hence making the book enthralling.

I have completed my Masters in 'Graphic design and Visualisation' from Loughborough University. I have always pushed my limits to experiment with varied ideas, hence producing designs that are beyond the ordinary. My motive is to create designs that are not only alluring but also serve to provide changes for a higher purpose that this world needs. As designers, it is our duty to produce work that challenges our creativity to push our limits beyond the norm of appealing and visually correct designs. It is upon us to incorporate this norm along with the righteous principles aiming to better the world. For this reason, I chose to work on the pop-up book which aimed to educate children about climate change, the effects of our actions and what can be done to improve the situation. This highly sensitive topic was depicted in a whimsical story format with the interactivity of a pop-up book to captivate the children, thus putting the message across in a fun and effective manner. For this project, I tried acquiring various new skills to accomplish my goal of producing an effective output. I tried to overcome the limitations of the current difficult times and intended to deliver an output with utmost proficiency.

The Horrible Green Cloud - A pop-up book for children

In my final year (2019) of my bachelor's in graphic design at 'Symbiosis Institute of Design', I was given the 'Best Degree Project Award' for my work. This award was for a project where I had designed and engineered the working of three different games for both, partially and completely visually impaired children.

In the third year (2018) of my bachelor's degree, one of the logos that I had designed was chosen to be displayed in an exhibition on 'The International Typography Day', alongside other notable works of some renowned designers.