Figure illustrates warmth sensation responses for Chinese men and women (40℃) at rest. All female data were higher than male (p <0.05). The grey area is unsurveyed.

Mean cold sensation in 33 areas of Chinese females and males in 20℃ (adapted from Gerrett et al. 2014)

This shows that mean skin temperature was stable during the experimental phase for both males and females.

Local skin temperature variation was consistant between males and females. 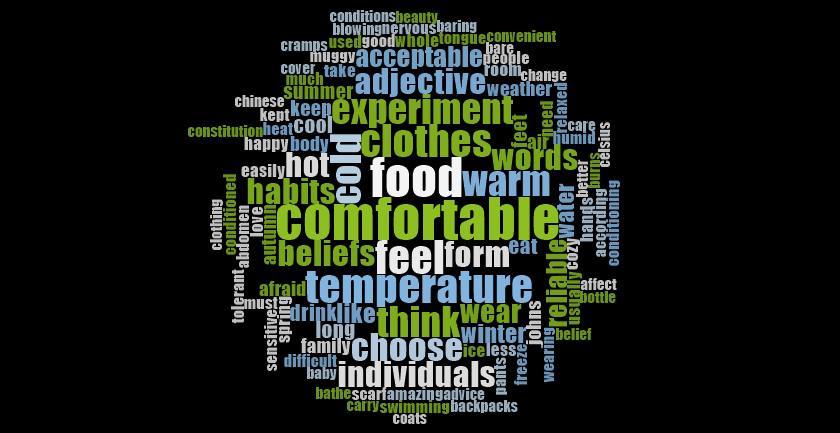 Word cloud generated from interviews with particpants about thermal comfort

The interview were conducted in Chinese, and included many unique Chinese slang words, which were difficult to translate into English. Most participants mentioned that their concept of heat and cold came from family members. In traditional Chinese thinking, keeping warm is very important.

Through two experiments, the differences in thermal sensitivity between Chinese men and women. The optimal temperatures were studied, and the different thermal comfort caused by gender differences were explored, providing standards and design guidance for human thermal comfort of climate control systems, so as to design a truly comfortable thermal environment.

The aim of this study was to investigate the regional differences in the local skin response to thermal stimulation between Chinese males and females. The difference in sensitivity between a Chinese male and female is not well defined. The research results can extend the knowledge and understanding of thermal sensitivity, thus, providing a theoretical basis for subsequent industrial product design research. This research investigates the effects of ethnic differences on thermal sensitivity and comfort, and attempt to understand whether the observed differences can be attributed to physical, physiological, or perceptual variations.